Did you know that in Kanban Tool every account has its own web address?
For example, if you signed up to use "acme" domain, your account and login page is available on https://acme.kanbantool.com.
I don't have an account yet and would like to start the free trial »
Thank you! We have sent you an email with details about your accounts.

Kanban versus ScrumA comparison of Scrum and Kanban 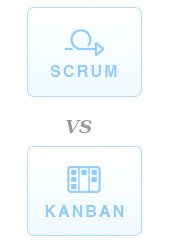 As far as Agile process tools go, Scrum and Kanban are both popular and easily implemented. What exactly makes them different, though?

Scrum was originally optimized for software development teams. The idea is to split large tasks into small, well manageable items, and complete them within a specified amount of time - one sprint. Also, you should divide your team into a couple of smaller, cross-functional teams, each ideally including a stakeholder - the product owner. The last necessity is in holding daily Stand-Up meetings, which are your team's time for communicating.

Kanban, on the other hand, is concentrated on making the workflow visually self-explanatory, and on limiting the amount of work in progress. By utilizing its analytical functions, you're able to be always improving your performance: to achieve kaizen.

Scrum, with its complex rules, applies best to large software development projects, which require a lot of time for their completion. On the other hand, Kanban, thanks to simplicity of its implementation, as well as to the ability to improve continuously, allows for easy prioritization and helps to bring employees across many departments closer together. This, in turn, contributes to perfecting the process in general, bringing about an overall improvement. The size of the project doesn't really matter, as Kanban puts very few constraints on the shape of a project, allowing to customize it, make it to order.

Improve your team performance like Kanban Tool happy customers did:

© 2009-2020 Kanban Tool ® by Shore Labs. All rights reserved. | All other trademarks, logos and images mentioned on this site belong to their respective owners. | We use cookies on our website.