As Klaus Leopold mentioned on his website, scaling Kanban means no more than doing more of Kanban. So really, it shouldn't be difficult, should it? 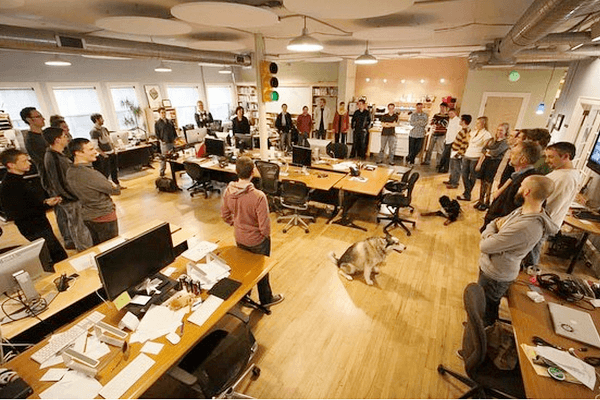 If you've done Kanban for some time, you're probably well aware of the fact that working along the Kanban lines takes a tiny bit of a disciplined effort. This will not change when spreading it on an entire organization's level. The Kanban boards need updating and improving as the process changes, and general policies need regular monitoring. Ensure that the same rules apply to the bigger picture, and the first step is done.

It is important to organize the teams in a way that creates fairly small, ideally - cross-functional and, above all, autonomous groups. Their autonomy will drive motivation, add to their speed and promote self-responsibility. Aside from the team's size, it's worth applying similar policies and objectives to different levels of work.
For instance:
- team A will work on the general features list (implementation time-scale of 3 months),
- while team B works on an already planned feature (time-scale of 1 month),
- and team C works on the next planned release (time-scale of 5 days).
They do completely different things, but there is no real reason why they couldn't all follow the same process and similar culture.

Keep the original policies in place, but should the need arrive to alternate them - do so - moving forward is more important than sticking to once set rules. With the growth of your team, you should be able to keep the teams small in general, so the ability to maintain the policies will remain. It is the overall Kanban culture that you need to keep alive throughout all of the organization's levels. After all, Kanban is not a recipe for success, it's just an approach to making improvements. So, it's the connection between different teams that needs attention.

In order for any policy or rule to prevail, there needs to be someone responsible for bringing it in and keeping it in place. This is what the ever-popular Kanban Coach, Agile Trainer or Scrum Master should do in an Agile company - keep the Kanban in place and look after it. It will never be self-maintaining without a leader.

Promoting ownership means getting the team members to participate in building their board, as their relation to it will be more involved and better motivated by this. If the Kanban board comes from them and not from the management, it makes more sense to want to follow and update it. This basically places the feeling of control and self-management to the workplace.

Scaling Kanban is not easy, but it is doable, as seen in many cases. Keep in mind that the overall goal is for the processes to improve, not grow out of proportion. Often times less complexity brings more clarity and efficiency, Kanban can facilitate this, when applied carefully and with thought.