A group of people working along is not necessarily a team, is it? If all that brings them together is the same manager or a shared office, and none of their actions align towards a common goal, chances are, a work-group is all they make.

Should it be though, that you have a shared goal to achieve, or that actions of one are highly influencing the ones of another, the indication is, that you may be working as a team. Why is it important to know the difference? If what you've got is a working group, convinced they are a team, their goal setting and their execution are likely to be hurting the workflow and productivity.

It doesn't take genius to see, that if a team leader actually runs the show and directs the members, they are all parts of a group in which no-one - apart form the leader - has a decisive role. Should it be though, that the leader helps out, manages conflicts and makes suggestions and all on the team are empowered to take a stand - they may actually be a team.
It may well be, that when a good team gets to work, they require no management at all - people will find their roles, whereas in a group, it's often necessary to assign work and coordinate people.

You look at a team at work, and see a constant battle of views. Realizing the difference between a constructive and destructive conflict is key here. If people keep fighting to preserve their view, or - even more likely - their position in the group, and are reaching no conclusion (strongest wins), we cannot be talking of teamwork.
If, however, the different views bring in new perspectives, allow the group to see a problem in new light and to reach a common, best solution - without bringing personal accreditation into it - they are working as a team and thereby are being creative together. Conflict, when approached right, can be the best motor for development. 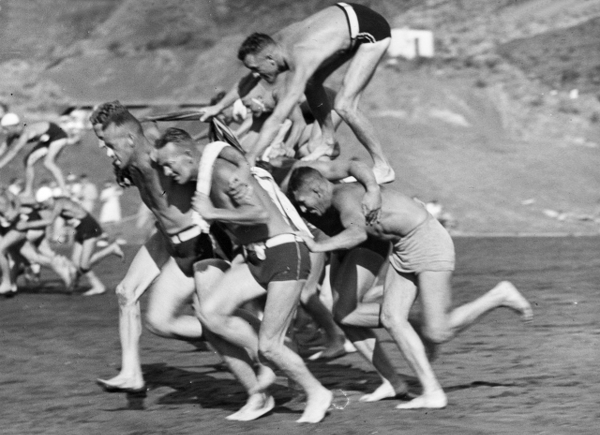 If you're not with us - you're against us

That's a tough one: you can forget about creating a good team if there is no trust between the team members. Obvious as this may sound, building trust within a team is most difficult.
Having a trusting team means being able to express doubts, admit mistakes and ask for help. In other words, it means working as one organism, of which certain parts will fail and know other will pick them up, and admitting that they are all codependent.
Once this level of trust is achieved, a team is able to work towards the same thing together - not one against each other. If you've got this, success is close. After all, the purpose of building a team is to achieve more than any one individual could do on their own.

Get the priorities right

From the highest organizational level, team leaders are likely to be part of a department team, but they can remain focused on their team proceedings and are more than likely to view the department level from the lower team'a perspective. It's important to keep in mind, that the goals of a higher management should be prioritized, as even the best lower level team cannot dictate the direction of an entire organization. So, you may be a great team, but you're still a part of a larger one!